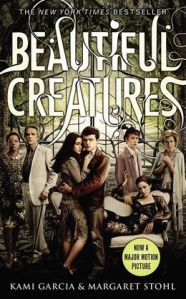 “Beautiful Creatures” by Kami Garcia is a paranormal teen book that has gotten RAVE reviews…and I just don’t get it. While I did actually somewhat enjoy reading this book, it was a bit tedious. This entire series has great potential to be a phenomenal supernatural story, but due to the over explaining of EVERYTHING, it misses the mark. Each book could be summed up in about 300 pages verses the 600+.

Ethan Wate lives in the small town of Gatlin, South Carolina, smack in the middle of the Bible Belt, where nothing out of the ordinary ever happens. And he hates every minute of it. With his mother’s recent death, and his father’s evasion of life since the accident, Ethan’s only companions are his best friend Link, and his superstitious nanny, Amma—a “Seer” who can see the future and contact the spirits of her deceased family.

When Lena Duchannes arrives in Gatlin to live with her eccentric uncle, Macon Ravenwood (the notorious recluse), the town gets a little shaken up. Of course, the snooty debutant-type girls at school automatically hate this not-so-prissy-prim-and-proper new comer and label her a freak, doing everything in their power to make her life a living hell. Little do they know, they weren’t that far off the mark—Lena and her family are Castors (universally known as witches).

For months before Lena actually arrived in Gatlin, Ethan had been dreaming about her—literally. So naturally, he’s immediately obsessed with the girl and learns all about her not-so-normal life. In the Castor world of Kami Garcia’s books, Castors’ powers are claimed by the moon for either the light or the dark upon your Sixteenth birthday, and Lena is terrified of going dark, like her mother.

Of course there is an entire past legend/mystery that unfolds, linking Ethan’s life and ancestors to Lena’s. A new drama develops every few chapters or so, such as Lena’s “dark” cousin Ridley (who is a Siren) showing up and seducing Ethan’s best friend Link, persuading him to do her bidding with each suck of her lollipop. No, really…a lollipop. It’s not a dirty metaphor for anything.

Again, I didn’t entirely hate this series. It has serious cool potential and characters…this quote is one of my favorite descriptions of Lena Duchannes: (She’s sounds like a badass chic that I could totally get along with.)

“She was wearing a purple T-shirt, with a skinny black dress over it that made you remember how much of a girl she was, and trashed black boots that made you forget.”

There is also a touch of snark and wit here and there in the novels, which I appreciated:

Thus, to end my rant, I will say that if you have HOURS of your life to waste, go ahead and pick up “Beautiful Creatures” and give it a whirl…it’s not completely terrible. But if you are like me, and have the attention span of a ferret, skip this one and read something a little more stimulating. (If you need recommendations, just ask! I have them coming out the wazoo!)

Alas, the movie was the same as the book…it took WAY too long to end! I was intrigued for about the first 30 minutes or so, but then I found myself becoming bored and restless. There just doesn’t need to be that much extra “stuff” to get the point of the story across.

*The horrible southern accents were quite entertaining, though 😛

I saw The Host this weekend, and while I wasn’t “disappointed,” I also wasn’t “awed.” If you have read the novel, The Host by Stephenie and enjoyed it, the movie is worth seeing. But if you haven’t read the book, don’t expect the movie to be anything special.

The film followed the novel almost to a “T”, but thankfully cut out a lot of unnecessary fluff. For example, a scene that lasted about 100 pages in the book was summed up in about 3 minutes of screen time. The costuming and filming sites were spot on from what I pictured in my head when I read the book, which I greatly appreciated. And the romance did bring out my inner chic, causing me to squeal and “eeeeap.” However, the effect of having the one body host two minds was better achieved in my mind while I read…the dual voice switchover while staring at the same body in the film was just weird and a bit annoying.

My boyfriend (who has not read the novel) found the movie insanely annoying and lackluster, but with a lap full of theater snacks, the movie was as bearable as can be expected of a guy for movie made from a Stephenie Meyer book.

All in all I would give this movie three out of five stars.