Out of the Easy is another amazing piece by Ruta Sepetys. Like her first novel, Between Shades of Gray, this historical fiction tale is beautifully told.

“My mother’s a prostitute.” This is the opening line for the book. That right there will get anyone’s attention. Taking place during the 1950’s in the infamous Big Easy (New Orleans, Louisiana), Josie is the daughter of a call girl.

Growing up, Josie has learned all about the inner workings of a brothel and is beloved by the house’s Madam. Having moved out at the age of 12 to live in the bookshop where she is employed, Josie still visits the brothel every morning to clean and catch up with Willie, the Madam of the house. Josie’s mother was never a nurturer, and Josie grew up under the wing of Willie, and the house’s driver, a kind-hearted quadroon man named Cokie.

Josie swore at an early age that she would never be like her mother. With a brilliant literary mind and always at the top of her class, Josie hasn’t seriously considered college before. That is until a rich man from Memphis stops into the bookstore and plants the seed in her head. Not long after, a young woman Josie’s age stumbles into the shop and tells her all about her life at Smith College in Massachusetts. After attending an Uptown party with the girl, Josie makes up her mind. Someway, somehow, she is getting out of New Orleans.

“I wasn’t certain of anything anymore, except that New Orleans was a faithless friend and I wanted to leave her.”

Josie soon discovers, though, that your past will always haunt you and she beings hating all aspects of her life. Why is it that some people have it so easy? They are born into wealth and can have their pick of schools and just about anything else they desire in life. While she has a less than satisfactory application due to her lack of extracurricular activities (because she has worked two jobs since she was a small child), Josie’s chance of admission to an elite school is a long shot. But everything isn’t always as peachy as it seems from the outside looking in. You know what they say, “The grass is always greener on the other side.”

“Let me tell you something ‘bout those rich Uptown folk. They got everything that money can buy, their bank accounts are fat, but they ain’t happy. They ain’t ever gone be happy. You know why? They soul broke. And money can’t fix that, no sir.”

Living in a city full of scandalous temptation, where climbing up from the bottom seems impossible (especially if you have a selfish mother, who refuses to let you go, and just keeps trying to drag you down with her), Josie has some pretty tough decisions to make.

“I was a scrappy girl from the Quarter, trying to make good. No matter how I parted my hair, I couldn’t part from the crack I had crawled out of.”

Sometimes trying to better yourself appears to be an impossible task. And sadly, still relevant today, money always seems to be at the root of our problems. You must have a fierce determination to accomplish your dreams. And often it’s hard to remember that no matter how bad and out of control things get, it’s always worse inside your own head. If you lean on someone you love, you’ll find a much lesser burden weighing you down. That’s what family is for. Holding it all inside to blows things up to an epic proportion.

Reminding you what it’s like to fight for your dreams, when they seem much too far away to reach, I give this elegantly woven story five out of five stars. I can’t wait to see what Ruta Sepetys has in store for us next! 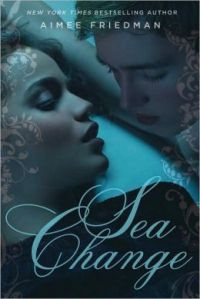 Sea Change by Aimee Friedman is an enchanting summer tale. If you like mermaids, islands, and romance, this quick beach read is not to be missed!

Having just split with her boyfriend, and fought with her best friend, Miranda is totally fine with leaving New York for the summer. Her summer destination: Selkie Island, near the Georgia coast, to help her mother clean out and organize her late grandmother’s estate home known as The Mariner.

On the ferry ride over to the island, she hears a lot of gossip about Selkie Island, and many people warn her to beware of the mist that surrounds the isle. Upon arriving, Miranda quickly hears gossip of mermaids who can emerge from the ocean and walk on the shore.

And of course, a cute guy is involved. Miranda soon meets Leo, a mysterious islander with emerald green eyes and (naturally) she falls for him and begins meeting him on the beach, amongst the mist.

“Leo kissed languidly, a kiss like he had all the time n the world, a kiss as hot and slow as the summer itself. I understood why people sometimes went crazy, risked everything for a kiss.”

Then, as Miranda stumbles across books on selkies, mermaids, and mermen among her grandmother’s possessions, she can’t help her roaming imagination as she wonders about Leo’s amazing ocean-swimming abilities and the fact that he seems to just “appear” out of the water.

“I wanted to tell Leo that I’d imagined him as a merman so he could laugh with me too. But the mere word was too absurd to even say out loud. Merman.”

While the characters are only surface deep, this magical story gets a three out of five stars from me. If you’re looking for a light beach reach, Sea Change is the book for you!

I have mixed feelings about The Name of the Star by Maureen Johnson, and its sequel, The Madness Underneath. I really enjoyed her book 13 Little Blue Envelopes, and I guess I was comparing this series to that one.

Aurora “Rory” Deveaux is from a swampy town near New Orleans, Louisiana. Both of her parents take a job teaching American Law at the University of Bristol for one year in England. Rory decides to join her parents for the year in England and to attend a boarding school in London called Wexford.

Rory has kind of an awkward personality. She’s a little ditsy and talks ALL THE TIME. About nothing in particular, really. And she makes up stuff a lot just to have a story to tell. Now, I’m not going to lie, some of the shit that comes out of her mouth (or in her thoughts) is quite funny.

Shortly after Rory’s arrival at Wexford, killings start happening around London that mimic those of Jack the Ripper. The weird part: No images are ever caught of the killer on any CCTVs.

Then while at dinner one night, as Rory is rambling on about some dramatic tale, she chokes on a meat pie and nearly dies (yes, by choking on a meat pie…I know, right?!). This (ridiculous) near-death experience gives her “The Sight,” enabling her to see ghosts. She finds out about a team of Secret Ghost Police in London and starts hanging out with them to try to catch the killer ghost, because he keeps hanging around Rory at school and she starts seeing him everywhere—and no else can.

The story is well written and the narration is quite humorous, but the main character kind of got on my nerves. I had a hard time relating to her. The whole “ghost serial killer” thing was well told and pretty creepy…it had the desired effect of making me jumpy. I found the plot to be a bit slow moving, though. And I thought the ending to The Madness Underneath was a bit ludicrous, but I am still intrigued enough in the series to read the next installment when it comes out.

The Name of the Star is on the 2014 Louisiana Teen Readers’ Choice Nominated Title List (LTRC), due to the main character originating from a fictional town in Louisiana (my home state).

All in all, I would give this book (and its sequel) three out of five stars.

Great quotes from the series:

“Where I come from, it’s too hot to run, and it’s generally not encouraged. The joke is, if you see someone running in Benouville, you run in the same direction, because there’s probably something really terrible right behind them.” –The Name of the Star

“Annoy a southerner, and we will drain away the moments of your life with our slow, detailed replies until you are nothing but a husk of your former self and that much closer to death.”—The Name of the Star

“On the way here, I saw someone pissing on a wall,” I said. “It reminded me of you.”

“That was me,” he replied. “I was writing a poem about your beauty.” –The Madness Underneath